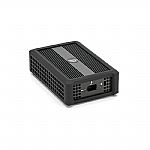 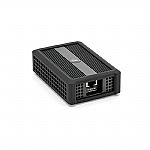 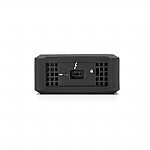 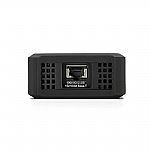 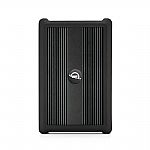 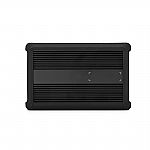 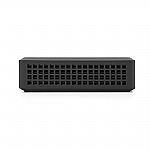 Login to see pricing and availability!
If you don't have an account, Become a Reseller!

The Thunderbolt 3 10G Ethernet Adapter adds up to 10Gb/s Ethernet connectivity to Thunderbolt 3-equipped computers that lack built-in capabilities. If you’re a video editor, creative pro, musician, or gamer, you can experience blazing-fast transfer speeds with signal reliability, stability, and security wherever you work or play. Connecting the OWC Thunderbolt 3 10G Ethernet Adapter to your Thunderbolt 3-equipped Mac or PC adds warp speed file transfers to your workflow. Now you can access 10GBASE-T 10Gb Ethernet networks and other devices, such as a Network Attached Storage (NAS) system, to transfer large multimedia files at over 900MB/s real-world speed. While improving project efficiency and workgroup collaboration with the quickest network connection available, the adapter is also backwards compatible with other Ethernet standards including 5GBASE-T, 2.5GBASE-T, 1000BASE-T, and 100BASE-T. For post-production to work at maximum efficiency, multiple editors need to collaborate and work as a team. The Thunderbolt 3 10G Ethernet Adapter keeps projects on schedule and under budget by giving multiple editing workstations the bandwidth needed for sharing and editing data-intensive creative content like video, animation, and graphics. Now editing can take place directly from files on a shared RAID storage device or NAS, such as OWC Jupiter Callisto or OWC Jupiter mini, without the time waste of downloading files to individual workstations. The Thunderbolt 3 10G Ethernet Adapter opens up a world of high-performance network connectivity to Thunderbolt 3-equipped notebooks that lack built-in Ethernet connectivity and to desktop machines handcuffed by a built-in 1Gb/s Ethernet port like the iMac 2017, Mac mini 2018, and All-In-One PCs. Without having to incur the extra expense of a full 10Gb Ethernet network, it’s becoming common for budget-constrained, yet performance-oriented creative professionals in small or home offices to connect to a 2.5 – 5Gb/s equipped router or switch. Unfortunately, these pros are often limited to Gigabit Ethernet (1Gb/s) speed by their computer. By simply adding the Thunderbolt 3 10G Ethernet Adapter to their machine, photographers, videographers, musicians, and other creative pros can now enjoy greater signal reliability, stability, and security with up to 5x faster speed on 2.5 – 5Gb/s networks and up to 10x faster speed on 10Gb Ethernet networks. With an ideal combination of affordability and performance, most wired local area networks installed over the past two decades utilize Cat 5e or Cat 6 copper cabling. Unfortunately, these setups are limited to a maximum 1Gb/s speed. Thanks to its built-in 2.5GBASE-T and 5GBASE-T technology (formerly NBASE-T), the Thunderbolt 3 10G Ethernet Adapter can deliver up to 5Gb/s speed over existing cabling for up to a 500% performance increase and maximum infrastructure ROI. The Thunderbolt 3 10G Ethernet Adapter achieves its blazing fast transfer speed and keeps your computer performing at peak because it was built with advanced features such as flow control and 64-bit address support; TCP, UDP, and IPv4 checksum offloading; and TSO, LRO, and RSS stateless offloads. Featuring a unique ventilated design that maximizes airflow, the Thunderbolt 3 10G Ethernet Adapter’s rugged aluminum housing works as a heat sink to operate silently cool without needing a fan. The adapter draws its power from the Thunderbolt 3 port with Energy-Efficient Ethernet support for low computer-power use and no AC adapter needed. Further complimenting its portable potential is a rubber sleeve to keep the adapter safe from bumps and bruises when thrown into a backpack or gear bag. Time-sensitive data such as audio and video media streams require Audio Video Bridging (IEEE 802.1Qav, AVB) ready gear. No sweat…the Thunderbolt 3 10G Ethernet Adapter can stream vast volumes of high-quality data to multiple destinations in real-time with very low latency over existing network cable. Thanks to network Wake-on-LAN support, you can easily wake a hibernated Windows or sleeping Mac computer for remote system management, program use, and stored file access. Now instead of having an “always on” system wasting energy — and your hard-earned money — you can keep a work or home computer in a low-power state that’s accessible anytime from any location. With real-world tested speeds over 900MB/s, the Thunderbolt 3 10G Ethernet Adapter lets you transfer a large 50GB file in under a minute!

Fill out the form below.